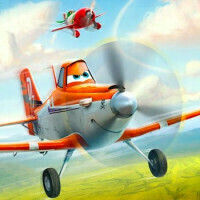 Planes: Jet Stream Racers is an awesome airplane game featuring characters and locations from the Disney film Planes. You first control Dusty who is a crop dusting plane. As you progress and collect points you can purchase other planes from the movie. The controls are simple. Use the up arrow to make your plane fly higher, and use the down arrow to make your plane fly lower. During each level you must try to fly for as long as possible and keep collecting fuel tokens so your plane doesn’t fall out of the sky. You can also collect speed boosts that provide your plane with a huge blast of speed – during a speed boost your plane becomes harder to control however. There are 5 different levels to play and you must try and earn 3 stars in each level. You can also replay each level with the different planes characters. This game is huge amounts of fun and a great way to celebrate this awesome movie!